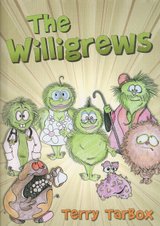 Long ago, in the distant future, in a place not far below the earth and not all that far above it, there lived a small tribe of creatures. Or should that be a tribe of small creatures? Anyway, the tribe was small and so were the creatures.

They were called the Willigrews, which was strange because not one of them was called Willie, and they never grew, which was why they were so small.

Now the Willigrews were odd-looking things. They were about the size of a golf ball (not that they ever played golf, which was just as well). They all had legs, but not all of them had the same number. It all depended on which family they came from.

Most of them, however, had two legs, which started at the bottom of their little round bodies and finished on the ground … just.

Their arms were a sort of skinny version of their legs, except that they had hands on the end instead of feet, and stuck out from the sides of their bodies.

The Willigrews’ heads were a different kettle of fish, about half the size of their bodies and a bit fatter than their arms. They had small round noses, pretty pink lips and big, big, big blue eyes (except for the ones with big, big, big brown eyes), and their bodies were covered in the brightest, silkiest, greenest fur.

Bronglay was chosen as leader because he had powers – magic powers. Although all the Willigrews had magic powers, only Bronglay’s worked.

Bronglay was married to Yill, who was the most beautiful of all the lady Willigrews. Her fur seemed greener, and she was more graceful than the rest. Bronglay loved her very much.

They had two sons, Rewsin and Father (who was named after his father).

The Willigrews were mostly farmers. They grew chickweed, which was what they liked to eat.

Most of the time their lives were peaceful.  They liked to eat and drink, they liked to sing and dance, and they lived happy, contented lives.

Other things did happen, however – otherwise this would be a pretty boring story!